2-Day trip to Desert in Zagora

5-Day tour from Fes to Sahara

We are Annexe company of

Berber culture tours  is a local Moroccan tour company located in Marrakech , owned and run by Mubarak, a Berber from the Sahara Desert of Erg Chebbi in the south-east of Morocco. Mubarak was born and grew up  near erg chebbi sand dunes (the hihgest and the largest one in Morocco ). When he was seven years old he entered the school in a small village there when his parents were still living in a tent and were traveling  across the Sahara Desert in caravans to trade with local nomads and also with others from  Algeria, Mauretania, Mali and  Sudan .

As a child, Mubark  was given the responsibility of looking after his father's sheep  and camels during holidays . The last  years of his studying were spent in the high school ,  because his parents prefered to help them ; looking after their animals instead of going far from the family to the university .

As the borders have been drawn later between countries which share the Sahara, it is no longer possible to cross into Algeria, Mauretania, Mali or Sudan for  trading . Beside that, The change in climate also effected the lifestyles of the nomads. As it got more and more dry, the rivers and lakes dried up and left carvings in the landscape. The grass soon disappeared leaving a barren land unsuitable for grazing animals. All these factors oblige mubarak s family and other nomads to look for an other  new life by building mud houses. Date palms were planted and a small agriculture developed in the oasis as well. With all these changes , the family  lived in the village and Mubarak had the oportunity to meet and help tourists visiting the area, telling them about his life and culture, which is how he learned more to speak  English .

Later, he  decided to get his driving lisence which helped him a lot to look for a beter life. So , he has chance to  work  as a driver and as a guide at the same time for some companies in the tourism industry. After spending many years ,working for these companies , travelling over all Morocco ; visiting all its corners , exploring  its deferent cultures and its variety of traditions and meeting visitors from all nationalities , Mubarak  got a big experience and learned a lot about what the visitor likes and needs , that s why he decided to create his own company to satisfy his guests by organizing something local , authentic  and 100% Moroccan with a kind of luxury.

If you are looking to experience a traditional way of Berber life and looking for an enjoyable , safe, comfortable , cultural and authentic Moroccan trip ,  get in touch with Mubarak . Tell him about your interests, what and where you'd like to visit and he'll be able to suggest a tour tailored to suit you and your pocket. 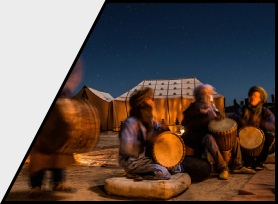